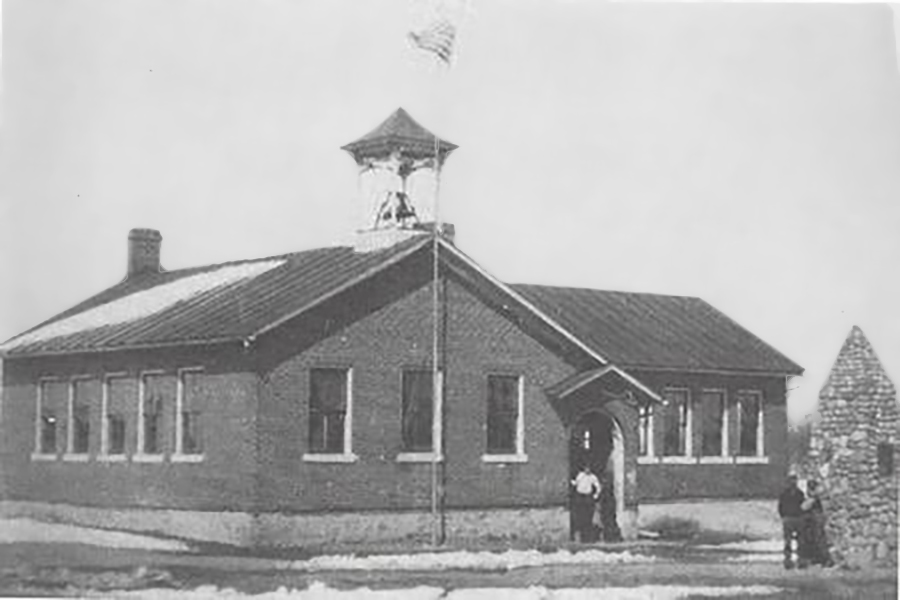 The early trappers and farmers wanted their children educated.  On April 17, 1828, Bridge School was organized.  This school was first made from logs.  It was built the same year the first wooden bridge was built: The present brick school building; was built in 1868.  On the 100th Anniversary in 1928, the pupils and former pupils erected the stone monument in front of the school.  William Cominess was president of the Bridge School Alumni and it was his idea that the students and alumni each bring a stone for the monument.  The monument is to the right in the picture.  This schoolhouse building is now being used as the Raisinville Township Hall.  It was deeded to Raisinville Township, by the county of Monroe, in 1980 and has been closed as a school since 1946.  This building was first used as a polling place August 1982 in the primary election and has undergone extensive remodeling.  Carl Kamminski, Clinton Rapps, and WaIter Berns are in this picture.  The monument was unveiled on Saturday, June 23, 1928 by Mr. Fred Knaggs, age 83 and Mrs. Tryphine Thomas, age 80.  They were the oldest to attend. Geraldine Chambers and William Barnaby, Jr. were the youngest and they also helped.  Bridge School was the first public school in the State of Michigan.  It was organized before Michigan became a state, in 1837.